A woman cut me off in traffic the other day. When we ended up side-by-side, as inevitably happens, she looked over mouthed “Sorry.” I guess that was better than flipping me the bird. But it didn’t excuse the poor decision she had made and she knew it.

I’m not one for preaching and moralizing. But, sadly, this kind of behavior has become normalized and not just in traffic. A colleague misses an appointment. A team member is late with a project. A friend never shows up on time for the occasional lunch, but always has a story about why he’s late. We stew. We fume. We learn to adjust. They say, “I’m sorry.” We say, “That’s all right,” when it really isn’t.

Some argue that busy people deserve some slack because they’re busy people. But that’s not true. There have been US presidents who have been punctual and held those around them to that standard. There are also been US presidents whose staff learned over time to move every appointment back 45 minutes to accommodate constant tardiness. There are times, of course, when “stuff” happens. We all get that. But when “stuff” becomes the consistent theme, I would argue this is a lack of respect for colleagues, friends and the strangers with whom we inevitably interact.

The people I admire most and try to spend time with, are those who simply follow through on commitments in a timely way and are thoughtful of others, whether stranger or friend. Interestingly, all those people seem to find each other amidst those who can’t seem to respect our time and extend common courtesy.  When I’m checking references, asking for help, or looking for ideas, they are the first people I turn to. They are generally the most willing to step up when needed. They know that I will do the same for them. We recognize that each other’s time is valuable and possess the empathy to act respectfully.

As we begin the new year, why not make a commitment to reduce the “I’m sorrys” in your life. Trust me. Your effort will be reciprocated by the best people around you.

A recent article in The Wall Street Journal explained the phenomenon of “Bring Your Parents to Work Day,” in which employees’ parents spend the day wandering around the office watching their offspring and colleagues write memos, answer e-mails and the other tasks required of their jobs. The enthusiasm for this, of course, is not shared by everyone. “It’s almost like we’re in a zoo and we’re the animals,” says one employee.

Our neighbor’s only child graduated from engineering school two years ago and took a job on the other side of the country. For the past two years, his mother has been traveling once per month to visit with him for a week at a time. She claims he’s always delighted to see her. Hmmmm…

Much has been made over the past decade about parents showing up to their kids’ job interviews and calling bosses when their children express unhappiness or frustration about the job. Most of this conversation has centered on why these “kids” won’t grow up. But let’s face it – Parents are complicit in, if not largely responsible for, this conundrum.

When I entered college in the seventies, my parents dropped me off and said, “See you at Thanksgiving.” My wife’s brother dropped her off and said, “Have a nice life.” Now, I’m not suggesting we return to an era of “sink or swim.” But can’t we find a middle ground?

The employers I speak with every week express frustration with their emerging employees’ inability or unwillingness to work independently and reason through the daily decisions learned through trial and error. While menu-driven technology has played a role in this phenomenon, many of these young people have not been compelled to develop problem-solving skills until they reach full-time employment. Sure, they have the content knowledge and understand what work outcomes are supposed to look like. But that’s very different from pulling the trigger on a decision and living with the consequences.

So, what’s my advice for hiring these individuals?

No little blog-post like this is going to alter the ingrained habits of over-protective parents. Eventually, all of these “kids” grow up and learn the decision-making skills essential to success. But parents, let’s all step out of their way so they’ll be compelled to develop these skills before they’re 30. 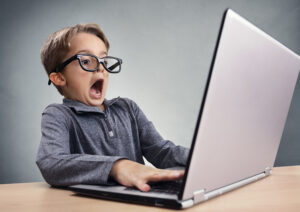 That’s right. Last week, Nicola Mendelsohn, a vice president at Facebook, suggested that statistics showed that the written word becoming all but obsolete, replaced by moving images and speech. She added that in five years time Facebook “will be definitely mobile, it will be probably all video.” (She didn’t cite the origin of her data.)

Then there’s comprehension. During her remarks, Mendelsohn argued that, “The best way to tell stories in this world, where so much information is coming at us, actually is video. It conveys so much more information in a much quicker period.” So quantity is more important than quality? Tell that to the brain researchers who have determined that retention and comprehension of knowledge is markedly better when read than heard. Tell that to the readers who savor the details of an exquisitely written novel.

Processing information is a tiny element of the equation that eventually produces wisdom. Sadly, information continues to expand exponentially while wisdom seems to be shrinking. Reading requires effort. It expands your vocabulary. Frankly, it slows you down so that the brain is able to absorb and process the key concepts.

Video, on the other hand, requires little effort. You don’t even have to turn the page. Sure the brain absorbs it, but at such a pace that little is processed. No process, no learning? No learning, no knowledge. No knowledge, no smarts. Isn’t that why they used to call television the “boob tube?”

Before taking predictions like this seriously, we might want to consider the current struggles of Twitter and Linked-In and others that all set out to be the world’s answer to communication. So before assuming the demise of the written world, these Facebook kings and queens might want to consider what could be eating their lunch in five years time. Ah, the arrogance of youth.

On my way out of the country this past month, I set-up an auto-responder to let people know that I would be replying to e-mails as best as possible. Later that day, I launched an edition of this newsletter to my 17,000 subscribers. Of course, some of those subscribers had also placed auto-responders on their accounts for a variety of reasons.

Over the years, I have encouraged employers to make sure their employees truly understand the firm’s business model by providing some vivid explanations. One of these has been to bring a stack of cash into an all-company meeting and demonstrate how that $3000 purchase becomes a net of about $50-100 after expenses, taxes and so on.

I recently mentioned this idea to a group of executives in Ottawa. After the meeting one of them told me how he had tried a similar approach by holding up a ten dollar bill and then tearing off pieces of it to represent the various expenses. He hold me that after the meeting one of his long-tenured employees picked up all those pieces, taped the bill back to together and stuck it in his pocket.

It is sometimes easy to forget how every dollar counts when your dealing with the large sums that flow through a business. But not to those in the oldest generation who still embrace the phrase “scrimp and save.”

I have been studying the evolving societal influences on decision making over the past several years. Some of these forces have people yelling “big brother.” Others spend their lives seeking entertainment and convenience. Three decades ago, Dr. Neil Postman explained this tension in his seminal book, Amusing Ourselves to Death. Rather than my interpreting his work, I’ll let it speak for itself.

“. . . alongside (George) Orwell’s dark vision in 1984, there was another—slightly older, slightly less well known, equally chilling: Aldous Huxley’s Brave New World. Contrary to common belief even among the educated, Huxley and Orwell did not prophesy the same thing. Orwell warns that we will become overwhelmed by externally imposed oppression. But in Huxley’s vision, no big Brother is required to deprive people of their autonomy, maturity, and history. As he saw it, people will come to love their oppression, to adore the technologies that undo their capacities to think.”

Consider your daily decision making. How much of it is influenced, dare I say controlled, by central authorities? How much of it is influenced by your human nature to take the easy way out, even though you know the more difficult way is the better way? Life is a continuous series of daily choices. Smart decision makers have found ways to balance these tensions. How about you?

From PCs to Google Glass, the 21st Century has birthed an evolution of digital technology resulting in a striking difference between the way people of different generations use it at work.

This difference serves as a line of demarcation that runs between two camps of employees: digital natives and digital immigrants.  Because the younger set grew up with the click and swipe conveniences of mobile devices and 4G connections, Skyping and using apps comes as naturally to them as walking. As technology continues to evolve at break-neck speeds, those in the older generations are doing everything they can to adapt. For these digital immigrants, adopting new digital tools can sometimes feel like walking with prosthetics, and it’s hampering their style.

A college dean mentioned to me that he and his colleagues have been frustrated by the increasingly specific demands placed on them by students.  It seems that simply providing a one or two page syllabus no longer suffices. Those in their classes ask endless questions about length, format, content, organization and so on.

“We suspect there’s a strategy behind all this,” he said. “The more details are defined up front, the more they can argue that a particular item that was not defined on the syllabus, cannot be required in the paper or project. . .”

For the past few years I have been speaking about those supervising people significantly older and younger at the same time. As the workforce continues to evolve, the number of these so-called sandwich managers is increasing rapidly.

I thought it would be worth a three-minute review of the essentials. If you’re not one of these managers, pass this along to someone who is.

I’ve been asked why young people don’t seem to look past the first three pages of an internet search. It’s human nature to take the easy way out and menu-driven technology seems to imply that we should do that all the time.  The consequence of all of this is that we tend to be guided or forced into making decisions that are not necessarily in our best interest.