I was reminded the other day of a story of an elderly woman who would stand at the entrance to her church on Sunday mornings before and after the worship service. She was there every single week simply smiling at everyone who entered. When the pastor asked her what she was doing, she said, “I’m smiling them in and smiling them out. Doesn’t everybody need that?”

This story has stuck with me is because it illustrates one of the universal principles for determining whether anyone is going to be a good match for a job. The people who work most productively with others are those seek to work collaboratively. Therefore, it is essential that you screen for this attribute during the selection process, regardless of the position.

The sentiment, “Don’t hire people and teach them to smile. Hire People who smile,” has been attributed to a number of people. But regardless who first said it, embracing this principle is critical to ensuring productive, long-term hires, especially in customer care positions.

One airline with which I am familiar, used to use to an interesting strategy for screening flight attendants. They would gather groups of applicants into a circle. Then they would say, “Before we get started, let’s have everyone get up a take a minute to tell us about yourself. You can talk about anything you would like to share.”

This, of course, would unsettle some of the applicants. Few people like to be put on the spot like that. But what the applicants didn’t know was that the evaluators in the room weren’t watching the presentations. They were watching the audience. Predictably, some applicants would smile, pay attention and encourage those who were speaking. Others would glance at their smart phones, check their appearance, or generally grow bored with the process.

Which applicants would you want as flight attendants serving your customers? The airline felt the same way. Those with the “others-focused” demeanor were the ones to be hired. How can you adapt this strategy for use in your screening process?

Applicants can have all the qualifications in the world. But if they are not others-focused, they can be an energy drain on those around them and the firm in general. Look around. What can you do in your environment to promote this practice?

I had been standing in the pharmacy line for almost ten minutes and was the next one to be served. Just as I approached the counter, a middle-aged woman slipped in front of me and said to the pharmacist, “I just need to drop this off,” while handing him a prescription.

“This person is next in line,” said the pharmacist.

“But I have to check to see if you’re in the system,” explained the pharmacist.

“I know,” insisted the woman, “but I’m in a hurry and I just need to drop this off.”

The pharmacist gave me that look that said, “Would you mind if I dealt with this rude woman?”

I shrugged and he checked her in.  “Thank you,” he said after she had left. “That happens two or three times a day.”

Outside of wanting to rant about this kind of inconsiderate behavior, this incident reminded me of something I’ve taught managers for years: How applicants behave and what they do once they’re hired can be vastly different things. All the interviews and tests in the world won’t reveal this. When the person’s in a rush, how is he going to treat those around him? When he’s feeling pressured, how will he treat the customer? When he’s in the last ten minutes of a shift, what will he say to the customer who’s going to delay his departure?

So, what can you do to elicit the “real” behavior from applicants? Try these three ideas:

First, have applicants come in contact with strangers. This could something as simple as asking the receptionist to chat them up. Does the person respond with understanding? Does he empathize? Perhaps instead he treats the receptionist with a dismissive, “I don’t need to talk to you,” attitude. Would you want this person on your team?

Second, keep the applicant waiting for a few minutes. No one likes to be kept waiting. But some of us are more patient than others. Does this person grow impatient? How does he deal with the delay? Does he chat with the receptionist? Does he find something to read? Does he review his notes about the company? Does he sit there and stew or ask what’s going on every five minutes. Who would you rather have on your team?

Third, place applicants in an environment where they have to perform. This strategy requires more time and effort. It is also the most effective. Ask applicants go on a “scavenger hunt” by collecting documents or information from several people within the company. This will force them to establish a brief rapport with each one. Then you can ask those individuals for first impressions. Place applicants in an office with an in-basket exercise and have people call and interrupt them with questions and requests that range from the informative to the weird. After an hour of this, you’ll get a feel for how they handle unexpected distractions, interruptions, confusion and the like.

All of these strategies deal with nuance. But it’s the nuanced behaviors of others that can get under our skin and can cost us money.  Is all this worth the investment? You decide. You’re making a thirty- to fifty-thousand-dollar decision by hiring someone.

Are these strategies fool-proof? No. But they will reveal the potential behaviors of people upon whom you will rely once on the job. Most people don’t get fired for a lack of competence. They are released because of the attitudes and behaviors that those around them consider unacceptable.

My daughter, Erin, is about to graduate with a master’s degree in student personnel administration. She applied for a job at a Midwest university that will pay about $45,000 per year. With benefits and so on, it will probably cost the taxpayers in that state $60,000. If she remains in the position for three years, those making the selection are making a $200,000 decision. Yet her initial interview lasted just 20 minutes. If she clears that round, she was told, she will be invited to campus for a round of in-person interviews. She’s wondering if the position is worth pursuing, if she’s offered the campus visit.

Even at twenty-four and in her first real job search, Erin has begun to critique the employer process. Why would they make decisions on who to invite to campus based on twenty-minute telephone interviews? How can the screeners possibly obtain the insights they need to make an informed decision in an interview that short? Is it worth a three-day commitment on her part, to drive down and back for the campus visit? If this is how they make the typical decision, it this an organization where she can thrive? What would you do?

I’ve been teaching employers how to hire people for more than 30 years. I’ve written five books and hundreds of articles on the topic. It still makes my head spin with the way some of those making selections screen applicants. If this process sounds like yours, STOP IT! Employee selection is one of the most important tasks in any organization. If you know of people doing this, let me know. I’d love to help them. 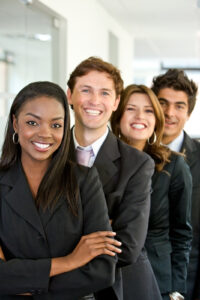 I shared this advice with the leaders of a Wall Street investment bank who complained that all their young analysts have been jumping ship within 18 months. I asked who they hire. “Only the best from Harvard, Yale, Princeton and Stanford.”

I asked why. “Because we only want the best working here.”

“Where did you all graduate from?”

“Can a B student from a good finance program in the Midwest do well here?”

“If he or she works hard enough.”

“Well, there’s a much better chance that someone like that is going to stay for five years than the Ivy League hotshot who looks at your job as a stepping stone.”

They protested that someone from the Midwest would have trouble thriving in the culture.

“Whose issue is that?” I asked. “You can have the hotshots for 18 months or some hardworking B Students from the Midwest for five or more years.”

Sadly, they couldn’t seem to get their heads around that. So we parted company.