I love my kids, but they leave the lights on. They’re both in college now, but when they returned for the Thanksgiving break, I found myself following them around trying to save electricity. How about your kids? Chances are, they do the same thing.

What about your employees? Turning off lights is nothing compared to breakage, the small mistake on an invoice or sending a package by the easiest, but most expensive, method. Grab a pen and paper. I bet you can list ten or more of these bottom-line drains. Many will seem insignificant to most people, but they add up to big dollars over time.

So what to do? You can’t nag on every little thing. But you do want to make them aware of how the bottom line is impacted when people don’t pay attention to the costs of doing business. Here are three quick ideas:

Make it graphic. I once interviewed the general manager of a light bulb manufacturer. At every orientation, he explains to new hires the razor-thin margins under which the company operates. As he does this, he holds up a bulb taken from a new carton. Then he drops it on the floor with a crash. “That bulb represented the entire profit for this carton,” he will explain. “That’s why we need to be careful at every stage of the process.”

Explain the bigger picture. The margin in the grocery industry is about one percent. Most employees surveyed think it’s closer to fifty. One retailer collected 15 random items in a grocery cart and then explained to a group of his employees the actual profit on each one, including cost of goods, wages and overheard. The margins ranged from less-than-zero to twenty percent. “One damaged box of cereal inside a carton can eliminate all the profit on that carton,” he explained. Just keep thinking ‘A penny on a dollar.’”

Provide an incentive. As the old saying goes, “What gets rewarded gets done.” An urgent-care clinic in the Colorado mountains was losing thousands in receivables due to incomplete information gathering when patients first arrived for treatment. Management improved front-line training, but also gave back a portion of the recovered receivables to the front-liners who took more care during admissions.

There are two ways to make money – earn it and save it. What can you do in the next few days to get the front-line to think about the bottom line? 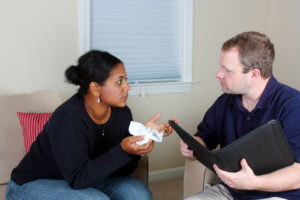 Over the years, I’ve presented several hundred case studies for discussion in the sessions I conduct. The thing that fascinates me is the way that participants in those case studies tell me, and the group, what they would do instead of actively participating in the role-play. But telling everyone what you would do is not the same as doing it. Inevitably, I have to stop them and say, “Wait a minute. Don’t tell me what you would say. Say it. What are the exact words you would use?” That’s where it gets awkward, and where the learning really takes place.

The same thing is true in real life. It’s easy to offer an opinion of what you would do. But dealing with the angry customer, troublesome employee, or difficult colleague is a whole different matter. Over the years, I’ve been faced with a host of these situations, just like anyone else. I’ve discovered that the key to a successful outcome is rehearsal. Don’t just think about what you’re going to say. Rehearse it out loud to a friend, spouse, colleague or whomever is willing to play along. This gives you the chance to refine the words and clarify your desired outcome. It ensures that you are not derailed by the other person’s comments or reactions.

The worst thing in the world is confronting a difficult situation and hearing the wrong words coming out of your mouth because you didn’t prepare. Have you lost a customer due to a slip of the tongue? Have you been out-argued by an employee you know is working the system? Have you been talked out of firing someone by the person being fired? Yeah, me too.

The difference between I would and I will costs time, treasure and reputation. Isn’t it worth a few extra minutes to prepare?