We’ve all been there. You’re discussing something with a colleague, an employee, or a vendor. The two of you seem to be making a decision as you hash out the issue. Yet, your intuition tells you something is missing. Maybe it’s a critical insight that’s been left unsaid. Perhaps you can see that the other person is hesitating because they don’t want to reveal something. This leaves you with that uncomfortable choice of creating an awkward moment or ignoring your intuition.

For many reasons, we have become increasingly hesitant to say or do anything that others might find offensive. But with all the sensitivities that have emerged in today’s society, that could be just about anything. As a result, we are left with the tension between asking questions that need to be asked and the fear of upsetting someone or damaging a relationship. The best decision makers have learned that the only way to gather the information needed for well-considered decisions is to sometimes ask diplomatic, but uncomfortable questions. Here’s how they do it.

Begin by considering whether the question is a legitimate inquiry. If the information will be essential to making the decision, then it needs to be asked. Recognize, however, there’s difference between a true need and just being “nosy.” In some cases, the person being questioned may know the question is coming and will accept that it needs to be answered, even if it creates an awkward moment. So once you open the door, you may find that asking the awkward question is not so awkward at all.

Next, think about the best way to ask the question. Many times, diplomacy will save the day when asking about sensitive topics. Diplomacy also fosters trust. If the person trusts you, he or she is much more likely for share what’s needed. If the person still takes offense, at least you know you’ve tried your best to approach the issue in a considerate way. The phrases below frame the question in a way that both demonstrates its need-to-know, but also your sincere intent.

“Perhaps this is an uncomfortable question . . .”

“Would you mind sharing your thoughts about . . .”

“I’m not sure you’ll feel comfortable with my asking this . . .”

It takes a bit of time to feel comfortable using prefaces like these. But they can be very effective at diffusing the impact of asking difficult questions.

Finally, accept the fact that even your best efforts can fall short. If the other person takes offense, one of two things is probably going on. First, they are genuinely offended for some reason you could not have known about. Second, they are taking offense because they are attempting to conceal something. In this case, a more appropriate way for them to respond to the question would be to say, “I don’t feel comfortable sharing that.” But sometimes that doesn’t happen.

Neither of these is your responsibility as a decision maker, so don’t “own” it. You might think that it’s unfortunate that the person is unwilling to be forthright. But that is that person’s concern, not yours. The fine art of diplomacy has suffered in today’s environment of transactional communication. The best decision makers, however, work to learn this art and maintain it. How about you? 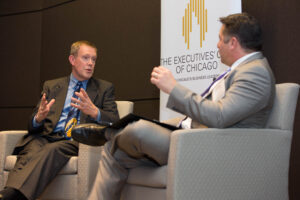 I’ve had the privilege of connecting with a large number of successful executives over the years. Whether it’s interviewing them for an article, facilitating a workshop, or chatting at a pre-meeting reception, I always look forward to these opportunities.

One the behaviors I’ve observed in many of these leaders is their curiosity, regardless of the person with whom they are speaking. This can be a peer, someone they supervise, a business contact, even the server delivering their meal. Typically, they don’t have an agenda, just a natural sense of wonder. They seek to understand and in the process they establish rapport.

Most people like to explain, be the expert, even dominate the conversation. Not these individuals. They’ve discovered that all kinds of surprises and insights can come from these typically short exchanges. It might be clarity on something they’ve always wondered about. Perhaps they’re conducting a sort of person-on-the-street survey. Maybe something about the other person sparks a particular interest.

At times, they can’t help themselves. I am sometimes granted just a few minutes to interview one of these leaders. Typically, I’ll open the conversation by briefly explaining my purpose. In a number of cases they have responded by asking, “Tell me about yourself first,” or “So how did you get into writing articles?” If I answer that question, however, their natural curiosity will follow up with another and another. If I’m not careful, we’ll spend half of my allotted time talking about me. When this happens, I have learned to politely interrupt them to get the interview back on track. In response, they’ll say something like, “I’m sorry, I’m always interested in what other people do.”

The result of this practice is an immediate rapport with the other person. Many times, the resulting trust wins them instant support and people willing to go an extra length if asked. This is not manipulation. It’s just a natural evolution for two people who develop an affinity for each other.

What’s the bottom line to all this? Act like a successful executive and ask lots of questions. As the old saying goes, “No one cares how much you know until they know how much you care.” Asking questions is a great way to demonstrate this.